The Tripurantaka temple is situated at the Balligave town that is at a distance of about 60 kilometers away from Shimoga. The Chalukyas constructed this temple during the 11th century. Tripurantaka is the main deity in this temple and they have made it in the form of Lord Shiva. Shivaratri is the best time to visit this temple, as the whole temple would be flooded with thousands of devotees. Shivaratri is a famou s Hindu festival that is celebrated once in a year and this is the time when this tourist city receives maximum number of tourists which in turn rakes in the revenue for its economy. 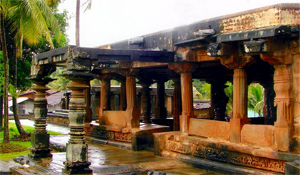 The Tripurantaka temple was constructed by the Western Chalukyas under the King Vishnuvardhana's era, says the history of this city. 1070 AD was the year in which the construction of the temple started and it was the same time when the Deccan Kingdom was at its highest galore. The kings who belonged to the Western Chalukya dynasty believed and worshiped Lord Shiva and created many temples in honor of him. Tripurantaka temple is one among such temple, which was built for Lord Shiva. The temple also has sculptures of Hindu Gods namely, Vishnu and Brahma along with Lord Shiva in the entrance of the temple. 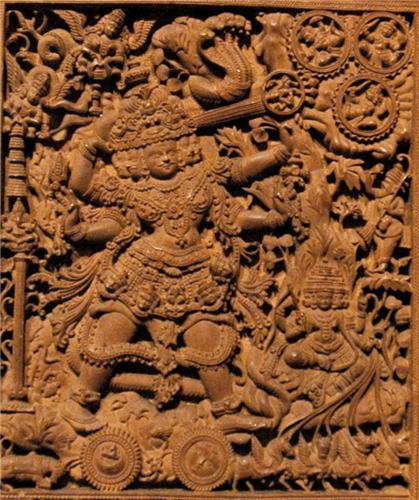 The sculpture of Lord Shiva, the main deity of worship at Tripurantaka Temple in Shimoga

Architecture of Tripurantaka Temple in Shimoga 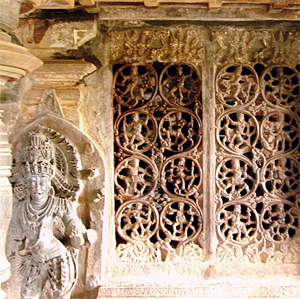 The Perforated window panes at Tripurantaka Temple in Shimoga features some intrinsic and unique designs
The stone sculptures that can be found on the doorway is said to be the Dikpalas that guards the deity in the temple. The top portion of the temple's entrance has many marvelous stone sculptures of Lord Shiva and Gajasuramardhana. The right side of it has the idols of Brahma, Ganesh and Kumara. The left side has the sculptures of Garuda and Keshava. Many sculptures that belonged to the Hoysala dynasty is still present in this temple. The sculpture that portrays the Hoysala king devastating a lion is one example for such sculptures. There are also many inscriptions that can be found in and around the temple portraying the hunting expedition of the kings who ruled the Hoysala dynasty.

One can reach Tripurantaka Temple in Shimoga through roadways, railways and airways as the administration of the city has ensured that the region enjoys a closely knit transport system that makes visitors from various parts of the country to reach the temple without any hassles.

By road
Shimoga has the best roads and the tourists can reach the temple by taking any bus from Shimoga.

By air
Shimoga Airport is the nearest airport and there are regular buses for the tourists.