Transport is an essential element for all people with tourist interest to visit a place often  and this is the reason why many tourists show interest to visit Shimoga each year. This city in Karnataka is found to be very well connected to different parts of the state and at the same time the city is also very well-connected to different important cities of India through a good network of roads, railways and airways. The effective administration of this city makes sure that the transport facilities are available to the public at any time to help them reach their destination at the right time.

Airways and Airport in Shimoga

Shimoga airport at Sogane is under construction and it lies at a distance of 6 kilometers from the city of Shimoga. At present, the airports located at Bangalore, Hubli and Mangalore are used by people to reach the district of Shimoga.

The Shimoga airport that is being constructed at Sogane is India’s very first private and regional Greenfield airport that is being developed under Private-Public partnership and the Government of Karnataka is also associated with the process of construction of the Shimoga airport at Sogane. The airport will be providing non-scheduled services in air and air taxi. The airport is scheduled to start operating from the year 2013. The airports of Mangalore, Hubli and Bangalore that are being used at present have various flights that have been scheduled to different cities of India and people travelling from or to Shimoga can easily make use of these airports for their journey.

Roadways and Highways in Shimoga

The city of Shimoga can easily be reached by road from Bangalore which is the State capital through National Highway 206 running through the cities like Tumkur and Bhadravathi. Karnataka State Road Transport Corporation or KSRTC runs quite a number of buses from the city of Bangalore to Shimoga that also include night and Hitech services.

Shimoga is 274 kilometers away from Bangalore and therefore it is very easy to reach Shimoga from Bangalore by car or bus. The route passes through Balebare Ghat or Agumbe Ghat roads. The cities of Hubli, Dharmastala and Sringeri are also connected by a road to the city of Shimoga. Shimoga is a city that is found to be very connected by road and this is the reason why this city also possesses a very nice and effective bus junction. The total road length of Shimoga is 6632 kilometers out of which National Highways possess 222 kilometers and 402 kilometers is possessed by the State Highways. 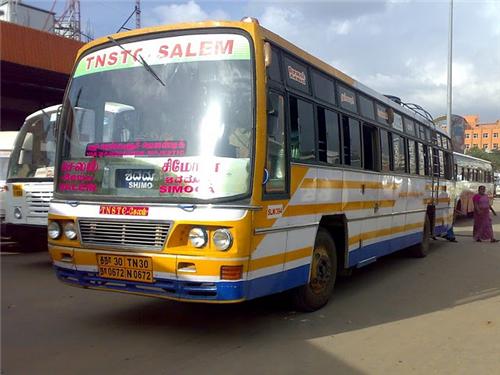 There are frequent bus service in Shimoga which can cater to the different budgets of its people
There are a large number of buses that ply from Shimoga to the state capital Bangalore and vice versa. These buses are available during the day and even during the night. The buses have various classes and people can choose the classes according to the size of their pockets. It takes approximately seven hours to reach Bangalore from Shimoga and the bus route covers cities like Bhadravathi, Tarikere, Kadur, Arsikere, Tiptur and Tumkur. 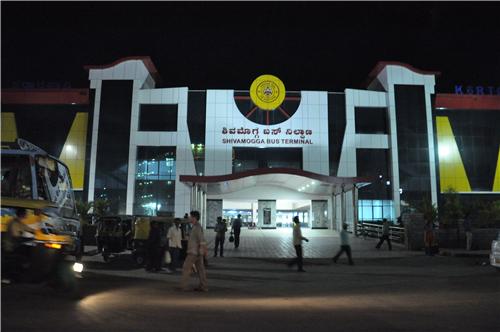 KSRTC Bus Terminal is located at a prime area in Shimoga which makes it easily accessible
Shimoga bus terminal is centrally located in Shimoga and there are buses available not only for Bangalore but even for cities like Mumbai, Goa, Chennai and Hyderabad on a regular basis. Private buses are also available with sleeper and seat facility but it is always comfortable to book the seats in advance.

Railways and Railway Stations in Shimoga

The rail car was introduced in the year 1990 when the passenger trains were reduced on the Shimoga - Talaguppa line and it could accommodate about 52 people at the same time. It could cover about 82 km distance within a time of 3.5 hours. This rail car or rail bus also had conductors who would offer tickets for money like they would on a bus. Once it reached Talaguppa, it would be reversed with the turntable to begin its return journey. This rail car service was stopped briefly for track conversion and then its service was resumed. 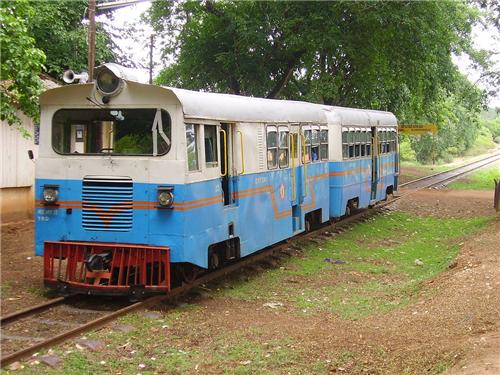 The rail car or rail bus is fast enough to cover 80 kms or more when compared to vehicles on road
There are three main networks of railway in the district of Shimoga and they are as follows:

Shimoga is a city that does not possess many tourist spots as it serves as the district headquarters. However, Shimoga possesses some very minuscule towns and it is also the greenest districts in Karnataka. People can always hire a cab to move around the city but it is always a good idea to look for guide in order to save some transportation cost. The autos that are available in Shimoga are not metered and the least amount charged by auto rickshaws is Rs.20 for several intra-city distances. Auto-rickshaws and cars are the only local transport available in the city though there are also buses plying from Shimoga to several other important cities of India. 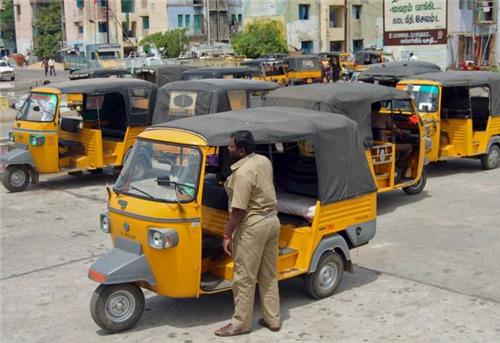 Distance from Shimoga to some Important Cities