Shimoga is amongst the famous cities in the State of Karnataka as it has many temples, churches, mosques and Jain temples located at various localities. During the festive seasons, all the religious spots in Shimoga are decorated and celebrated with great pomp following the tradition and culture that was gifted by the ancient kings who ruled the city in the past. 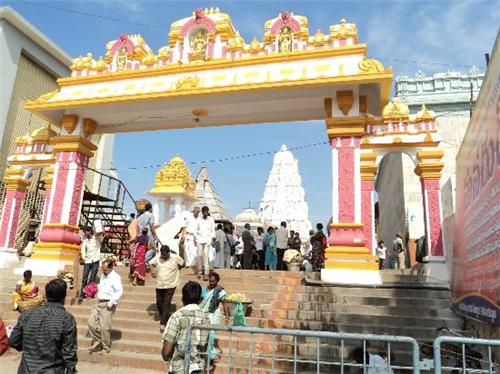 The entrance of Sri padmavathi temple in Shimoga

The Padmavathi temple was built during the period of Jinadatta Raya. This temple is located very close to the road which makes it easy for the tourists to visit the temple using any type of public transport. The Padmavathi temple is located amidst the luxurious green surroundings and the tourists can see the temple from the hill tops near it. The Parashwananatha idol inside the temple stands tall. This temple also has the idol of Devi Padmavathi and people from other states namely, Andhra Pradesh and Maharashtra visit this temple every year. The temple offers free accommodation facilities for the devotees who travel from other parts of the world.

The Sri Sigandur Chowdeshwari temple has Goddess Chowdeshwari, who is fondly called as the mother. It is believed that the goddess listens to the prayers of her devotees and showers blessings to them. This temple is located at a distance of about 110 kilometers from Shimoga and one can reach this temple in 30 minutes from Shimoga. The goddess is also known as "Sigandureshwari". The temple has a history of about 300 years and legends say that while King Sheshappa went out for hunting in the forest and he was lost in the forest. While resting nearby a tree, the mother came on his dream and requested him to construct a temple for her, which made the king to construct Sri Sigandur Chowdeshwari temple in Shimoga.

The Hoysalas in Bhadravathi built the Lakshmi Narasimha Temple, which is located at a distance of about 20 kilometers away from Shimoga in the state of Karnataka. The is under the maintenance control of the Archaeological Department. The temple was constructed during the 13th century. Veera Narasimha, the only grandson of Vishnuvardhana constructed the temple. The architecture of the Lakshmi Narasimha temple portrays the culture and tradition that was followed by the Hoysala people in the past centuries.

The whole temple was constructed by following the Nakshtra style and it is said to be about three feet in height. The Dwajashtambam of the temple was constructed outside the temple and it stands tall in the front side. The stone pillar that is constructed in the small pedestal flaunts a brilliant architecture works carved on it. The Lakshmi Narasimha temple has got three different Gopurams and the local people have named it as the Threekutachal Temple. The outer side walls of the temple have a detailed carving that also flaunts Hoysala style. Lord Narasimha is the presiding deity of the Lakshmi Narasimha temple, is the incarnation of the Lord Vishnu. This temple also has the idols of Lord Purushottama, Lord Sri Krishna, Lord Ganesha, Goddess Sharadamba and the Lord Narasimha.

The Pranaveshwara temple is located at Talagunda at a distance of about 63 kilometers away from Shimoga. Talagunda is the place where subjects like Vedanta and Vedas were taught by following the Gurukul system in the past generations. The Pranaveshwara temple is built for Lord Shiva and there is a stone slab near the temple that features the inscriptions about Lord Shiva. The temple also has inscriptions in Sanskrit carved on the pillars. Santivarma, who was a popular court-poet, developed these inscriptions during the middle of the 5th century. The inscriptions describe the Kadambas as Brahmins who later on became the conquerors.

The tripuranataka temple is located at Balligave town that is very close to Shimoga. It has the idols of Lord Shiva and was constructed during the 11the century by the kings of Chalukyas dynasty. People all over India visit the temple during the Shivartri that occurs once in a year.

The Sacred Heart Cathedral is one among the most visited churches in Shimoga city. The whole church is constructed by following the Roman graphic style. This church has a record as the second largest church in India. The construction area of this church is about 18000 square feet and it has got the biggest prayer hall inside it. The prayer hall has the capacity to hold 5000 people. The Sacred Heart Cathedral is located on the sides of the BH Raste road and the tourists can reach the church through any transport from the central bus stand. The church is a well known landmark in Shimoga.

Shimoga is the city that has different Jain temples in and around the city. Many pilgrims from all over India visit Shimoga to offer their prayers in the following Jain temples. These Jain temples are also popular for its architectural brilliance that prevailed in the yesteryear.

Mahavir Swami Digamber Jain Temple is fondly called as athisaya mahakshetra. This temple has Lord Parshwanathji and Divine Mother Padmavati Devi. This temple was built during 6th century.The temple is popular for the ever green Lakky tree, which is as old as this ancient temple.This temple receives many devotees and tourists each year.

Other popular Jain temples are:

Shimoga also has many mosques in and around the city and they are rich in ancient heritage and culture. They are: