Shimoga is part of Malnad region in the state of Karnataka which is also known as the land of hills. According to the records of the City Municipal Corporation of Shimoga, the entire district of Shimoga covers an area of 50 square kilometers. The hill ranges found in Shimoga are a part of the Western Ghats which is a region famous for lush greenery with plentiful rainfall. Shimoga experiences a tropical dry and wet climate which is a Koppen climate classification.

The average temperature during summer ranges between 200C to 360C. The month of March marks the onset of the summer season in Shimoga. Summera is quite hot and basically not a good time for touring the town; the season ends in June. Monsoon is experienced between July to September and heavy rainfall is the characteristic feature of Shimoga region. Winter season in Shimoga starts from the month of December and lasts till February. The winter temperature ranges between 250C to 370C and it is perhaps the best time to reach Shimoga because the place looks very beautiful and fresh after a heavy rainfall. 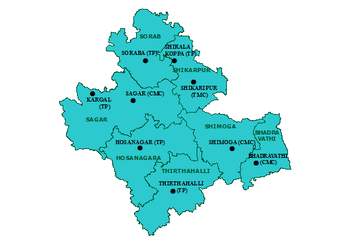 The geographical area of Shimoga is divided into two districts and seven taluks
Shimoga is popular for its lush forests, wonderful waterfalls, scenic beauty and cool climate. The average elevation of the region is 640 meters above the level of sea in the western part of the state of Karnataka. The topography of Shimoga is plain with some chain of hills possessing semi-deciduous vegetation appearing occasionally. The coordinates of Shimoga are at 13.9167° North, 75.5667° East and mean elevation of 640 mtrs. above sea level.

Shimoga is an origin of major rivers namely Gangavati, Kali, Tadadi and Sharavathi. Other important rivers flowing through Shimoga district are Bhadra, Varada and Thunga, Kumadvathi, Vedavathi and Kushavathi. These rivers serve as a major source of water for Shimoga. Rivers Bhadra and Thunga meet at a place known as Koodalgi located in Shimoga district. A very small place called Agumbe which is popular for the heavy and the highest rainfall that it receives also belongs to the district of Shimoga. The Silicon Valley of India located in Bangalore lies at a distance of only 274 kilometers from Shimoga. Shimoga also ranks ninth in its size in comparison with the other districts of Karnataka.

The dense forests in Shimoga serve as a home for several species of wild animals like tiger, elephant, leopard, lion, antelope, wild boar, bison, bear, porcupine, wolves, monkeys and several other animals. There are different varieties of birds also found in the district and they fly from all over the world to Shimoga. The farmers produce good yields of coconut, paddy, pepper, ragi, sugarcane and arecanut, thanks to the heavy rainfall in the region. They are exported to other nations in the world which in turn contributes greatly to the businesses and economy of the city.

The major dams that are found in the Shimoga district are as follows:

The Linganamakki Dam is built across Sharavathi River and is located at a distance of 6 kilometers from Jog Falls. The Mahatma Gandhi Hydro-electric Project with a power generation capacity of 55MW is also located in this dam. The water that is released at this dam flows into Jog Falls and this dam also best place to enjoy the falls during the monsoon season when there is excess water released from the dam.

The Bhadra River Dam lies on the Bhadra River located at Lakkavalli which lies at a distance of 20 kilometers from the city of Bhadravathi. Sir. M. Vishweshwaraiah who was the Chief Engineer of the State of Karnataka designed the entire Bhadra River Dam. Irrigation is the main purpose served by this dam in the region around Tarikere Taluk and Bhadravathi Taluk of the district of Chikkamagaluru. 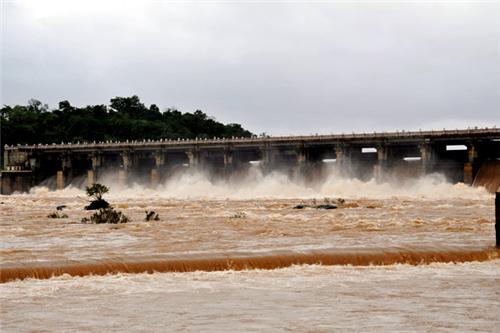 Gajanur Dam is found to be built on the River Thunga in the village of Gajanur that is located at a distance of 12 kilometers from the city of Shimoga. The dam is mainly located on National Highway 13. These dams find a place in the top tourist destinations in Shimoga as there are plenty of scenic places to enjoy.